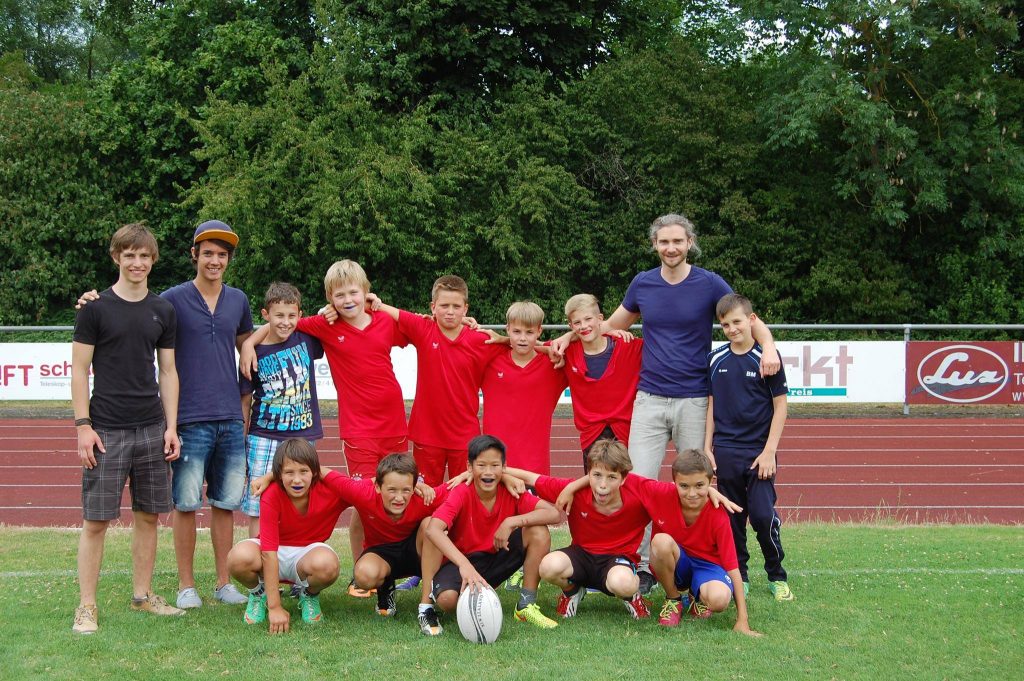 German schools often offer a wide range of extracurricular activities. Starting with a drama club, a Spanish language course or a first aid workshop –depending on their interests – there is also a lot of sport activities which can be attended of students after or between their school lessons.

It’s a great chance to get more knowledge on topics you are interested in individually. But not only teachers offer those school clubs, also students can challenge themselves with offering a course!

When Lukas Springholz from Germany was a student 2 years ago he also offered a course in his school, he started his own rugby club!

BGBA: How did you get in touch with rugby? What’s so fascinating about this kind of sports?

Lukas: I saw a rugby game in Scotland and I was enthusiastic from the first moment. What I like so much is the importance of working together as a team. A good cooperation is necessary to be a successful team. Actually team work is important for many kind of sports but I think for rugby it is even more important than for football for example. Also I like that rugby is a game for very strong headed people rich of energy. I think that this is the fascination of most people about rugby.

BGBA: Why do you think is important for the students to be physically active at school? What are the psychical and physical impacts?

Lukas: I think that everybody who already did sports intensively knows that this helps you to feel better. You are better in concentration, more powerful and balanced. Physical activity is also important for mental fitness. It is great to offer sports in school because many people don’t do sports privately. Now they can at least do it in school. Unfortunately there is sometimes a big dislike concerning physical education as an obligatory subject in school. I think that a change of the system is necessary: students should be able to choose the sports they like to do themselves and have the possibility to try new sports to find their preferred way to move.

BGBA: You spent a lot of time for this project. Why have you been so motivated?

Lukas: My motivation was that I have a lot of fun doing this sport and I wanted to convey other people to have fun with this sport. Also I liked the thought to build up something that lasts and that will also provide fun to people in future times.

BGBA: What did you learn yourself working as a trainer with younger and same aged people?

Lukas: I learned how to motivate people. For a voluntary sports group it is important to be not to strict so people still have fun, but the same time you have to be strict enough to keep the team working. For me it was very hard to find the best amount of strictness. Often I failed but with getting more experience I got better.

BGBA: In your team there were students of 3 different schools with high, medium and low education level. Did the training have an impact on the social interaction between those groups?

BGBA: Do you think your work was worth it?

Lukas: I think it was definitely worth the work. I had a lot of fun with training and I would do it again any time. Also our u12 (under 12 years old) was very successful which made myself very proud. I think it was a pity that the school didn’t support me so much with my work. In public they always pretended to be supportive for student engagement but in reality it was different. They didn’t even gave us suitable balls so a teacher had to give us his private one, we could get some old ones of a different sport club and also I brought my own. That was frustrating sometimes. But in general it was a very great experience and I would like to thank all the great players that always invested so much energy.

Lukas’ teams participated in some tournaments that were organized for school sport teams. Playing mainly against established teams it was often a “David against Goliath” situation, that’s why it was quite surprising his teams were able to challenge with other teams playing rugby together for years. The biggest success so far was made of his u12 team: The team can now call itself the best rugby team of Baden Württemberg, a German region with over 10 million inhabitants!

Before being allowed to offer a training program Lukas had to graduate a professional trainer license. “I learned about the rules of rugby and the technics. But also I learned pedagogical things like how to teach other people, how to structure a training …”

In Bulgaria school sports works only a little bit different. There is two classes of physical education every week and also there are competitive school sport games. Those school sport games can be compared with „Jugend trainiert für Olympia“ in Germany: They are targeted on the most active students and it is a tournament. The best teams can reach the next round a challenge with the best sportsmen of the schools in the country. The main difference compared to the German schools is the school sport days which every school holds twice a year.

Like in Germany not every school has its own gym. In this case students don’t have the chance to try many different sports. Also swimming classes are very rare because going to a swimming pool is quite expensive and the schools don’t own their private ones.